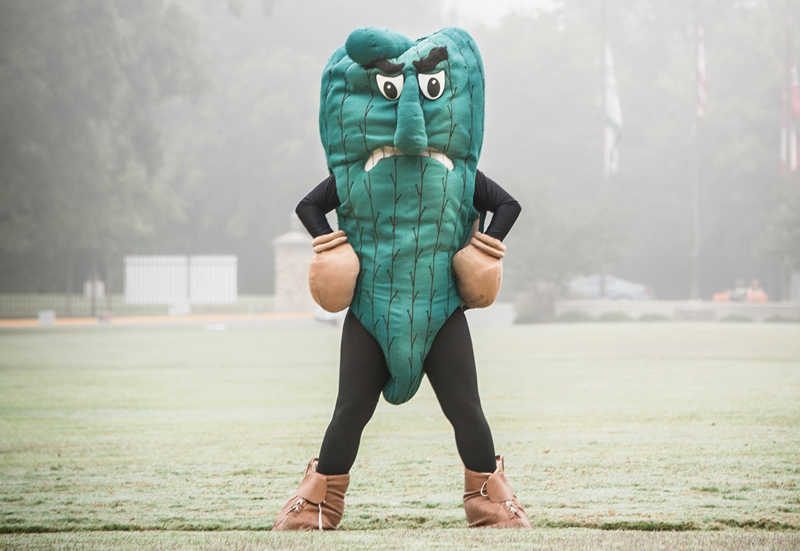 The “Fighting Okra” was first conceived in 1985. Its unknowing parents included a few members of the Statesmen basketball and baseball teams. Their idea was simple: “What is mean and green?”

The creation of the Statesmen was much humbler than that of the Okra. Delta State Teacher’s College held its first summer session in 1925. Later, in 1955, Delta State became Delta State College. Delta State was not considered a University until 1974. Through all of this time the official mascot stayed the same: the Statesmen. The mascot was created after the state representative who helped establish the school, Walter Stillers Jr.

The rivalry between Delta State University and Mississippi College is no secret and has recently been rekindled. During one of the notorious basketball games a fight broke out: “Fight! Fight! Fight!” students standing in the bleachers yelled as the Statesmen and the Choctaw mascots clumsily pushed at each other in an attempt to fight. Referees quickly broke up the fight and kicked the two mascots out of the game. It was then announced that a temporary ban on the Statesmen would be put in place.

After the game, basketball players and baseball players collected in the Court of Governors Men’s Dormitory. Houston Williamson, a basketball player, decided the “Fighting Statesmen” was not a fierce or mean looking mascot. All members present agreed the “new” mascot had to be mean and green. After several ideas were tossed around Bob Black, the baseball pitcher, suggested that an okra was “green, fuzzy, and tough.”

Ready for the next game, the baseball players lined the bleachers. They were ready to fill in where the Statesmen could not. “Okra! Okra! Okra!” four members of the Delta State baseball team stood in the bleachers and chanted.

“They had cut basketballs in half and painted them green and white with O.K.R.A. spelled out on the front.” Missy Hannah Kistemaker remembered. “The other team was confused, but honestly, we all were consumed, too.”  Soon others stood and joined in. Sean Doyle, one of the baseball players later explained that “an okra was the only mean vegetable that they could think of.”

It was at this basketball game in 1987 that the Okra was finally born. A few years later the student body would begin to embrace their “new” mascot. One that depicted an Okra wearing boxing gloves with a fierce facial expression. The Okra’s parents had no idea just how famous their child would become.

What started out as simply a joke that a few students put together as a temporary substitute became a permanent reality as time went on. In the mid-1990s the university held a vote which resulted in the adoption of the Okra as its unofficial mascot.

While some of the older Alumni don’t agree with the outrageous humor in the idea of a “Fighting Okra,” the younger generation has a different interpretation. Student Raven Allison expressed, “Everyone loves the Okra, from little children to adults. The party does not start until the Okra shows up.”