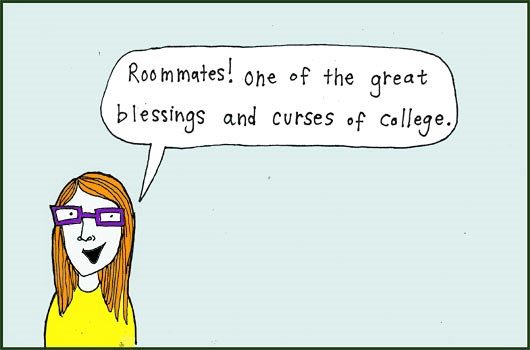 Some universities require that freshmen live on campus their first year and others don’t care if you do or not. Regardless, many of us at DSU have experienced dorm life, and that includes the good and the bad. I know there are plenty of pros and cons of living in the dorm, but I’m not going to talk about the great things about dorm life. Oh, no. I’m going to delve into the frustrating and irritating aspect of living in the dorm.

Let’s begin with the doors. And, no, I’m not talking about the front, back, or side doors that let you get into the building itself. I mean the doors to your rooms that are so heavy that they automatically close behind you with the intent to disturb everyone within your hall. Having heavy, thick doors like these does not bother me, but what does irritate me to no end is the fact that people just let them slam closed. I’m sorry, but hearing, like, seven different doors slam shut from other parts of the dorm tends to get annoying, to put it politely. I don’t need to be hearing your door slam shut because you’re in too of a hurry to grab the doorknob and manually shut the door so it doesn’t disturb everyone. I don’t need to hear you coming back into the hall or your room at four o’clock in the freaking morning because you have no respect for others’ possibly sleeping or trying to finish homework. It literally takes less than a second to stop the door from slamming and it doesn’t take a lot of effort to be quiet when you come back from partying or hanging out with your friends.

Bathrooms are your greatest friend, but they tend to be abused by your roommates and/or suite-mates. I live in Brumby-Castle where everyone has to share the bathroom with the room next to them. I don’t mind sharing as long as everyone is respectful and keeps everything clean. However, if people decide to leave nasty, dirty plates sitting in the sink or not clean up their own hair, then that’s where I draw the line. I’m not your mother: clean after yourself. I shouldn’t have to constantly pick up your hair just because you’re shedding. I shed, too, and I clean it up—in the bathroom, on the floor, and the counter. I do my best to keep my side of the bathroom nice and clean, so other people should do the same. Oh, and since we share the bathroom, the doors for both sides can lock from the inside. I’ll say it once more: “Unlock the door after you’re done.” Simple as that.

Another not so great aspect of living in the dorm are noisy neighbors. Quiet hours are still a thing, everyone, even though people should be mindful of the fact that someone could be doing homework or napping at any time. Now, I’m not saying people can’t have fun in their rooms or can’t laugh and joke around with each other. There are ways to do that without constantly screaming and shouting every five minutes, though. In Brumby-Castle, the walls are very thin and if people speak loudly enough, it’s very easy to eavesdrop. So, can you imagine how loud it sounds when people are shrieking and laughing at the top of their lungs when you’re studying or trying to sleep. Yes, this is college, and you get to have fun, but that doesn’t mean you throw away all common sense and act like a five-year-old screaming while with his/her friends. Being mindful of others and the fact that they might be studying for a big test the next day or trying to sleep because they have not slept well in the last three days is important.

Now, let’s talk about parking, shall we? All of the dorms have their own parking lots where registered vehicles can park whenever. Which is freaking great because I don’t have to walk that far to get back to my dorm after a long day. What’s not so awesome are people who don’t know how to park a car. It’s not that hard to park between two lines, people! If it is, then I suggest you learn how to park correctly before attempting to pull into the parking place beside my car. I don’t have the money or the patience to deal with someone who damaged my car because they can’t turn in between two vehicles. You hit my car, and not only am I going to be very pissed, but you’re going to face my wrath. Also, don’t be an asshole and park in two parking spots. Pick one or the other. There is no, “Let’s just park in the middle ‘cause I can’t decide.” Nuh-uh. One car per parking spot, dude. That’s just being rude as well as inconsiderate of the fact that other people need to park and you’re taking up two spots.

If we can all be respectful to each other and not be childish about certain things, then I think we can all get along perfectly well for however long you’re staying in the dorm. Compromise is a thing, people. Learn how to do it and don’t get your underwear in wad because your roommate/suitemate asks you to be respectful or clean up after yourself.