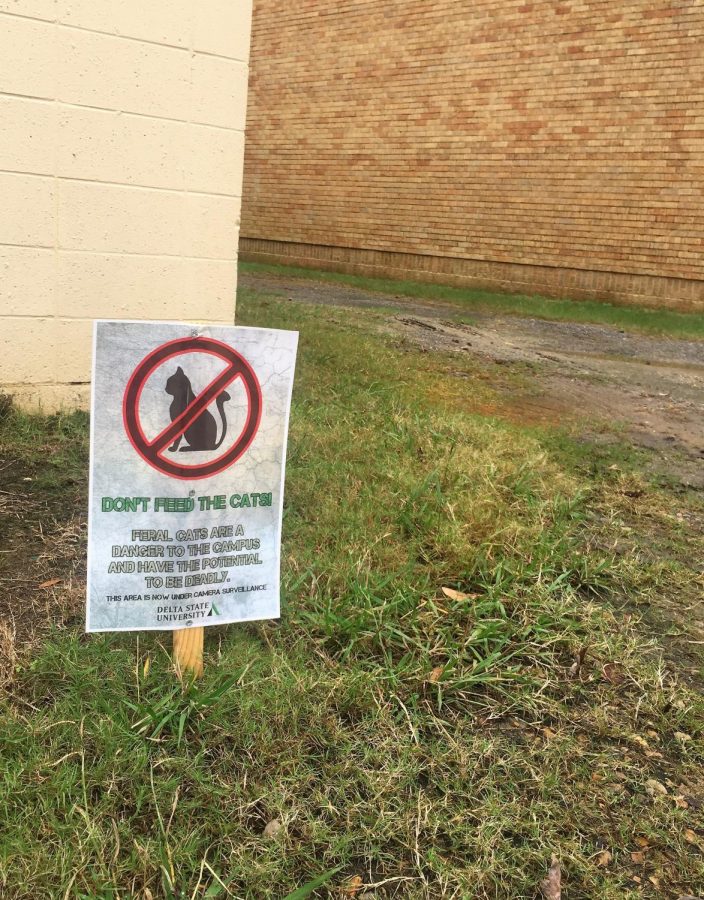 DON'T FEED THE CATS! signs that are placed throughout DSU campus.

Have you noticed the warning signs that were recently posted around DSU campus?

If not, it’s probably because most of them have been knocked over and eventually covered by dead leaves.

So, to fill those in who haven’t gotten the memo—

Due to possible illnesses and diseases that can spread through wild felines, these warning signs prohibit feeding the stray cats that wander campus.

“[The] area is now under camera surveillance.”

These signs have created surprising reactions and responses from the DSU community. Some people have agreed to share their opinions with The Delta Statement concerning this topic.

[All remarks have been contributed anonymously by members of the DSU community.]

Each person was asked to share their options concerning the, “DON’T FEED THE CATS!” signs.

One DSU faculty member that parks behind the student union said, “It never fails, there is cat sitting on top of my car every day when I leave, and I am not a huge fan of cats. So, I’m pretty happy they put up the signs.”

A current DSU senior claimed that, “Even being a cat person, and using some cat food,” they have still yet to lure in a campus cat. The student also mentioned that, “I personally see more skunks around than cats, and those things are not scared of you!”

Another DSU faculty member told a story about when she lived in the dorms her junior year at DSU, she was actually chased by a skunk when carrying in Domino’s from her car. “It ran after me across the whole parking lot, until I got up to the door.”

Despite the hateful feedback and consistent skunk sighting stories that came from the interviews, the university has valid reasoning behind posting the signs. Taking into consideration the oath of student safety, DSU must inform and advise those who may be unaware of the possible diseases that stray cats can often transmit to humans.

Feral cats can be dangerous and even deadly. This is because of potential bacteria they can carry and sometimes transmit to humans, such as Rabies or Cat Scratch Disease (CSD), also known as Cat Scratch Fever. If someone is scratched by a cat and does not properly and immediately tend to the wound, CSD begins to form and will quickly take over the immune system.

According to the Centers for Disease Control and Prevention website, it states from the reviews of the 2005-2013 MarketScan concerning the National Health Insurance databases, “Incidence of CSD was highest among those who lived in the southern United States (6.4 cases/ 100,000 population) and among children 5-9 years of age (9.4 cases/100,000). We estimate that each year, 12,000 outpatients are given a CSD diagnosis and 500 inpatients are hospitalized for CSD.  Prevention measures (e.g. flea control for cats) are particularly helpful in southern states and in households with children.” In addition to the fact that, “only 303 rabid cats were identified in 2010 in the US2 where the population of cats is estimated at between 25 million and 90 million. The likelihood that a particular cat is rabid is extremely low (0.3 to 1.2 per 100,000 cats), as is the likelihood of coming into contact with a rabid cat.”

Yet, even when taking into consideration the risks that can come from feral cats, there were oddly more claims that the skunks that roam campus seem to be more of a nuisance than the stray cats. Identical to feral cats, many people are unaware of the threats skunks have towards humans.

According to The U.S. Humane Society website, “Any warm-blooded mammal can carry or contract rabies, but the primary carriers in North America are racoons, skunks, bats, foxes, and coyotes,” and that, “Skunks are the dominant rabies victims in the north ad south central states.”

There are more alarming facts that need to be considered about skunks. As stated by The U.S. Humane Society website, “The skunk is one of four wild animals (including the fox, raccoon and bat) considered to be primary carriers of the rabies virus and is, therefore, classified as a rabies vector species. Skunks have also been known to carry leptospirosis.”

Leptospirosis is a bacterial disease often carried by skunks that can affect the health of humans if they come into contact with an infected skunk. “Without treatment, Leptospirosis can lead to kidney damage, meningitis (inflammation of the membrane around the brain and spinal cord), liver failure, respiratory distress, and even death.”

When look at the overall picture of this argument, it is easy to see the logic from both sides.

The warning signs stating, “DON’T FEED THE CATS! FERAL CATS ARE DANGEROUS TO THE CAMPUS AND HAVE THE POTENTIAL TO BE DEADLY. THIS AREA IS NOW UNDER CAMERA SURVALLIANCE,” is simply the university being cautious.

DSU is taking into consideration the potential dangers that a student could possibly acquire from a stray campus cat, but the DSU community is asking themselves, “What about the skunks?”