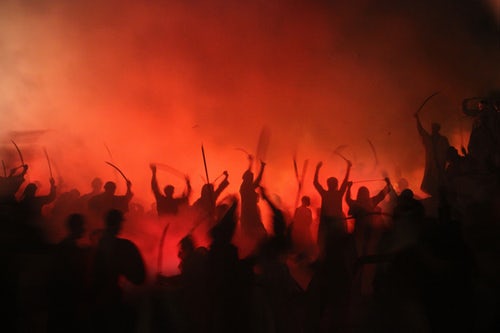 After an unknown incitement, English majors all over the Delta State Campus are acting erratically and violently. The violence continues for the fourth consecutive week. The initial incident happened on November 15, 2018.

On that day, around 12:30 p.m., a group of English majors were performing their normal noon ritual of eating lunch, reading long passages from literary criticism books and crying over the beautiful shapes that the crumbs made as they fell to the cafeteria floor.

Their typical gasps and cooings could be heard.

“It was like any other day until we heard the screeching,” says an eyewitness who has asked that their identity be kept a secret. “They [the English majors] were calm, and then all of the sudden, they were screaming and clawing at anyone who came close enough. I saw one poor student get pulled under.”

That young man still has not been found. Please, if anyone knows his whereabouts, contact the campus police.

“They kept shouting about somebody named Dostoevsky and Nietzsche. I couldn’t make it out,” said another eyewitness. “Some poor freshman came up to the group and asked them who that was. I haven’t seen her since.”

The Delta Statement staff would like to remind all students to never question or approach an unfamiliar English major.

Please, remain indoors as much as possible. If you get caught by an English major outside, do not make direct eye contact, do not make any sudden movements, try to make yourself as small as possible, and relinquish any books that you may have on your person to them as a distraction.

Stay safe out there.