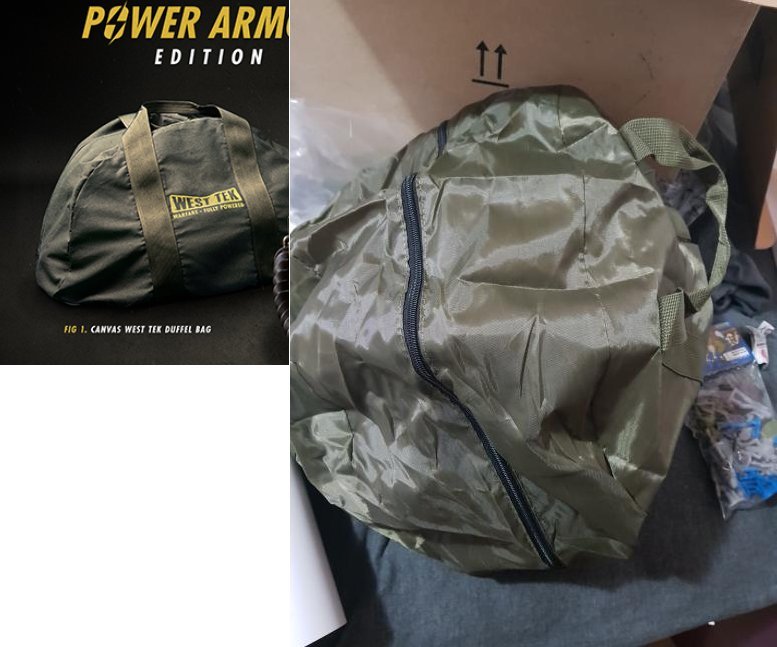 Comparison of the promised "canvas" bag that Bethesda advertised and the actual "Nylon" bag people got.

The only problem was, people didn’t know what it was. To everyone’s surprise, Fallout 76 was announced to be an online RPG, this would be the first Fallout game to not be a single player experience, and although fans were skeptical at first, everyone had some sort of hope for the game. Besides, what could possibly go wrong…

My Game Uninstalled Itself

Three weeks before the full release of the game, players who pre-ordered the game were given the opportunity to play the BETA for the game. Unfortunately, a massive bug appeared for PC players in which people had to redownload the entire BETA over again, and due to the fact that the BETA servers were only open for four hours, some people missed out on their chance to play the BETA.

Luckily, Bethesda stepped in and increased the time of the BETA so that people could still play it. The BETA itself was filled with bugs, but most BETAs are. They are designed to find problems within the game so that they can be fixed before the initial launch of the game.

So, with the information gathered from the BETA, it seemed that Bethesda had no more problems to worry about.

With the official release on November 14, fans were shocked by the overwhelming number of bugs, graphical errors and overall poor game design.

One glitch in particular, made it so that when some players interacted with the power armor, their character model would stretch itself and the game would remove the players clothes, turning people into disturbing naked monsters.

Bethesda decided to make a day one patch in order to fix some of the problems. Unfortunately, the patch consisted of a download that was 54GBs (Gigabytes), and the actual game itself was only 45GBs.

The patch could not be preloaded, which meant that players had to basically redownload the game again before they could play it. Luckily, Bethesda did manage to fix most of the game breaking bugs with this patch which did make the experience more enjoyable for players, and with this hard start out of the way, it looked like Bethesda could finally take a sigh of relief and relax.

Early in January, some players (with the help of teleportation hacks) discovered a hidden room in the game, that was left behind from development (which players have named the Developer Room), which contained every single item in the game including some items that were not officially in the main game yet. It also contained the only living NPC (Non-Playable Character) in the game.

After news got out, Bethesda responded by banning players who entered the room and moving the location of the room entirely. Bethesda was unsure of how people managed to find it and had to resort to asking the players themselves, claiming that if the banned players were to tell them how they got in they would look into shortening their ban time.

Unfortunately, Bethesda was not given much information, and it’s unsure if the Developer Room is still in the game.

The Patch That Re-broke the Game

On Jan. 29, Bethesda released a patch that changed some of the balancing options in the game. Unfortunately, the patch that was released was based off of an old build of the game.

Because of this, old bugs that were already fixed were now put back into the game due to it now running on an old version of itself.

One notable bug from this patch involves the bobby pin item. When the game first launched, bobby pins (a common item found in the game) weighed 1 lb., but later on, a patch came out and changed the weight of a bobby pin to .1 lb.

Bethesda was forced to quickly release a new patch a few days later on Jan. 31 fixing these bugs.

Outside of the Game, Fallout 76 contained some major problems with its marketing as well. Soon after its reveal, Bethesda announced that they would be selling a special edition of the game for $200 called the Power Armor edition, which contained the full game, in-game items and skins, a map with some figures, a replica helmet of the iconic Fallout Power Armor and a bag.

Bethesda claimed that this bag was going to be made with Canvas materials (high-quality fabric materials), unfortunately, when people received their $200 special edition they were shocked to find out that the bag did not look like the one that was advertised and was in fact made from Nylon, a more common and cheaper fabric material.

Once people found out, fans demanded answers, and Bethesda apologized by giving the people who ordered the $200 Power Armor edition 500 atoms of in-game currency (which comes out to merely $5).

A few days later on Dec. 3, Bethesda announced that if people were still unsatisfied, they could request a free bag made from the Canvas materials to be delivered to them by filling out a proof a purchase form. Unfortunately, a bug occurred, and people, who sent in their request forms filled with their email, home address and partial credit card information, had their confidential information randomly distributed to people’s Bethesda accounts.

Bethesda fixed the issue as fast as they could, but there was nothing else they could do about the already leaked information.

Fallout 76 is so Cheap Retailers Are Practically Giving it Away, Because They Are.

Upon initial release, Fallout 76 was sold at a retail price of $60. Unfortunately, due to its infamous rumors and poorly received reviews, many people decided on returning their copies and demanding refunds.

In light of this, retail companies that ordered hundreds of copies of the game, believing that it would sell well, now find themselves in a bind by having too much stock. Companies such as Best Buy and GameStop have had to come up with solutions in order to combat their overstock problem.

A GameStop in Germany was offering a free copy of Fallout 76 with the purchase of a used PS4 controller. And if that wasn’t bad enough, X-Kom, a Polish online retailer, ran a limited time offer where people who purchased a pair of PS4 thumbsticks for $5 would receive a free PS4 copy of Fallout 76.

Fallout 76 has been hit with disaster after disaster with both in-game problems and real-world problems as well, and its future is unclear. It has suffered from countless technical issues, and almost every possible problem that could go wrong with Fallout 76 did go wrong. But that begs the question…

What could possibly go wrong now?