Who Turned up the Heat? 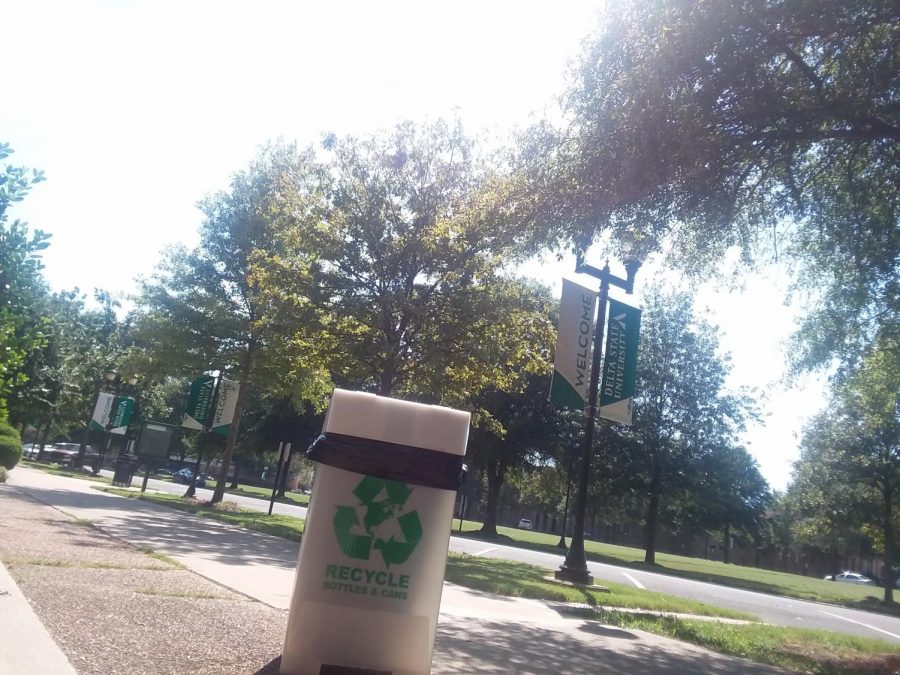 A Delta State University recycling bin in front of the trees of the Quad.

This year the Amazon reached a record high of over 90,000 active fires—a number that worries Brazilians and people around the world and reflects how the rate of deforestation is rising quickly.

The environmental policies active in Brazil currently contribute to the fires and deforestation.

Brazilian President Jair Bolsonaro has established himself as being supportive of agricultural policies and urbanization of the Amazon. Many of the fires were started by farmers who wished to use the land as a pasture area or loggers who wanted wood, resulting in some news outlets placing blame for the fires on Bolsonaro’s policies.

According to an article from natureresearch, under Bolsonaro’s policies, people who have illegally contributed to deforestation no longer have to follow a process of reforestation (replanting), and others can more easily gain access to illegally deforested land.

AP News reported that as soon as Bolsonaro took office, he handed the responsibility of protected and unowned land over to the Agricultural ministry which was essentially “letting the fox take over the chicken coop.” This transfer of responsibility put power over the land in the hands of farmers rather than in the hands of people whose main goal is to protect the rainforest.

The Justice Ministry—a governmental protection agency—previously held responsibility for the land, which led to the start of many newspapers referring to Bolsonaro’s policies as “anti-environmental” policies.

The aspect of the fires that has attracted global attention is how impactful the Amazon Rainforest is in relation to oxidation and de-carbonization of the earth. Not only does the Amazon Rainforest provide a large percentage of the oxygen to the people of Earth, but it also retains a lot of the carbon that is emitted.

ABC News reported that the smoke the fires carried to the city of Sao Paulo was so dark and carbon filled that it turned “day into night” and is what initially drew attention to the fires. These fires have already produced a noticeable change in carbon monoxide emissions and worry environmentalists about what will happen if the fires continue for much longer.

Wildfires are not only burning in the Amazon Rainforest, but in the United States as well. The past few years, California and Alaska have seen an increase in active fires as well.

One of Delta State University’s own alumni, Daniel Vernon, was affected by the fires in Alaska. He said, “It was a bit different this year as we had fires near popular locations such as Seward, Kenai, Cooper Landing, and various spots in the valley. Definitely hurts more as it displaces more people and impacts that local tourism and fishing hotspots. Also, [we] lost a historical mainstay for Alaskans called Camp Cantwell, which was sad.”

Even though Vernon did not interact directly with the fires, it still impacted his life due to how it made certain areas of the state be inaccessible or lost. He also mentioned that the smoke was prevalent from June to July, which affected what could be done outdoors.

When asked if he expected to encounter wildfires while living in Alaska, he said, “Yes, it was expected. Alaska is a gigantic state with a large amount of remote wooded area. It is hard to contain, but overall is a natural part of the environmental life cycle here. Climate change has likely played an impact on it as well as we reached record highs this summer.”

People across the globe have noticed the increase in wildfires and have often tied them to climate change. This has started peaceful protests on environmental policies that encourage anyone to join who want to make a positive change for the earth.