The Story of Professor Ferreira 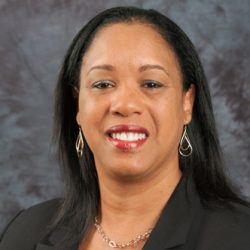 DSU’s beloved Spanish professor, Sylma Samuel Ferreira is from the Commonwealth of Dominica, an island in the Caribbean. Not to be confused with the Dominican Republic, another country in the Caribbean, the official language of Dominica is English, and 80% of the population also speaks French Creole.
A World Traveller
Professor Ferreira has been to school all over the world. From birth to college level, she attended schools in Dominica. She received her degrees from The University of the West Indies in Barbados, the Complutense University of Madrid in Spain and the University of Arkansas in the United States.

The pursuit of knowledge brought Professor Ferreira to many Spanish-speaking countries. She pursued specialized courses in the field of Teaching of Spanish as a foreign language at universities in countries including Chile, Colombia, Venezuela, and Spain.

It seems that education is an ongoing project and school never ends for her. She recently completed a specialized graduate certificate in TESOL at the University of Southern Mississippi. She says she is always involved in some form of learning or academic writing.
A Woman of Many Talents
In Dominica, Ferriera worked at the Dominica State College as the Senior Spanish lecturer. And the Head of the Modern Languages Department for ten years. She was also an instructor in Spanish at the University of the West Indies Open Campus.

She also worked very closely with the Ministry of Education in Dominica as the Spanish Language Specialist. This position afforded her the opportunity to carry out consultation with different agencies for International Cooperation in Latin America for various foreign language education initiatives and projects.

Before Delta State University, she also worked as a Spanish Teaching Assistant with the University of Arkansas while  in graduate school.
Choosing Delta State
Professor Ferreira received several job opportunities. She had the choice between a quiet, sedentary environment in the Delta or living in cities like Houston or Miami. Having lived in cities like Caracas, Santiago and Madrid, she says she chose DSU because she was looking for some peace in her life.

In her office, she has a token which a friend gave her with the inscription “Find PEACE.” Another Dominican friend of hers recommended the Delta because of the serene natural environment and slow-paced lifestyle.

Professor Ferreira says that Delta reminds her of Dominica. The only exception is that there are no mountains.

She also finds that the small university setting allows for closer interaction with students and the Hispanic community in the Delta.

“It would be remiss of me not to mention the university culture that supports faculty initiatives,” she added.

She has been able to introduce new programs here, such as the Spanish Minor. This was a big plus for her, and she hopes to continue to grow this program here. She has  started several cultural programs: Tertulia, Cine Club, The Pulsera Project and SiS- Study in Spain Student Ambassador program.

Professor Ferreira is also behind DSU’s Hispanic Heritage Day. DSU celebrates this day each year by bringing in outstanding international keynote speakers and cultural performances from the Hispanic community.