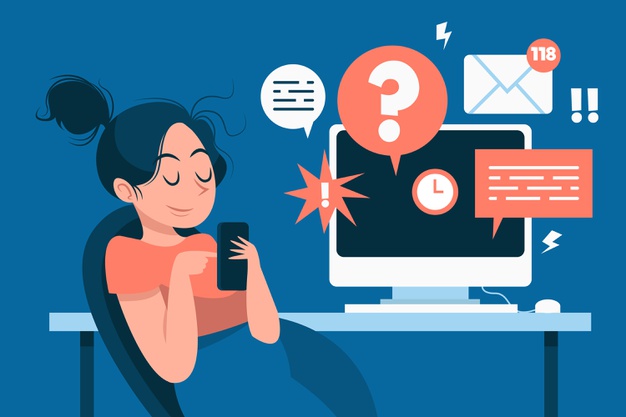 A student on the phone while ignoring several notifications from her computer.

“I can’t keep doing this to myself,” I say as I take a long sip from my coffee cup. My all-nighter has little to show for it except for dark circles under my eyes and increasing frustration. Procrastination has led countless students into similar scenarios and is a persistent issue in student life.

The cycle of procrastination is brutal and often feels inescapable. When assignments are a part of the picture, anything can seem like a good enough distraction to take a break. Once back to the task at hand, negative feelings arise, which makes the task harder to do under a shorter time frame.

Although procrastination is a conscious effort and its future effects are well-known, people still participate in it, despite it being illogical.

Emotional distress is caused by a multitude of reasons from everyday tasks; for example, maybe the task at hand is unpleasant or inciting negative feelings like anxiety. Dr. Fuschia Sirois, a University of Sheffield psychology professor, states that procrastination is “the immediate urgency of managing negative moods rather than getting on with the task”(The New York Times).

These overwhelming responses can cause one to push the assignment off to experience a moment of relief. In this case, relief does more harm than good. By avoiding negative emotions, you lay the foundation for a habit, which the brain sees as a reward.
Procrastination on Campus
Procrastination has always been a common problem for students, but living through unprecedented times doesn’t help the situation. In the midst of a global pandemic, motivation and determination can be hard to come by.

Covid-19 forced both students and instructors to adapt to new educational experiences with little time to do so. Virtual classrooms have made students feel out-of-touch with their course material and school as a whole. Irregular class meetings and Zoom lectures seem to make the days, weeks, and months blur together.

Hannah Alley, a Delta State student, says that “Online classes have made [procrastinating] so much worse. Where I would have been working ahead on assignments last year, I have now fallen into a ‘Due tomorrow? Do tomorrow.’ mindset.”

Students across the nation are experiencing similar mindsets. How can procrastination be stopped in its tracks when mental burnouts are becoming an increasingly common threat?
Overcoming Procrastination
You can’t expect to break the habit through scheduling tips alone, in emotional avoidance instead of productivity issues is because the problem of procrastination is rooted. Instead, a great way to ensure that you kick the habit is to face the problem internally.

A major factor is self-directed negative emotions, such as blame, doubt, and even hatred that keep procrastination in its vicious cycle. These emotions stay with us long after the assignment is due and only perpetuate the need to procrastinate in the future.

Instead, it can be beneficial to start the process of forgiving yourself for procrastinating in the past to truly learn from your mistakes. There is no need for avoidance when emotional recovery is put into place. A 2010 study showed that self-forgiveness promoted productivity because the students were able to move on with assignments without dwelling on past mistakes.

Although working internally would help with long-term procrastination, it is admittedly a lengthy and diligent process. External solutions can assist in making the process easier to introduce while also being productive.

Rewards are the most common way to promote productivity. Treating yourself after completing a task helps form the habit of not putting assignments off until the last possible minute.

Temptation to procrastination grows as we try to analyze all aspects of an assignment at once. It’s important to simply do the task one step at a time to avoid becoming overwhelmed or losing focus.