Opinion: Band IS a Sport! 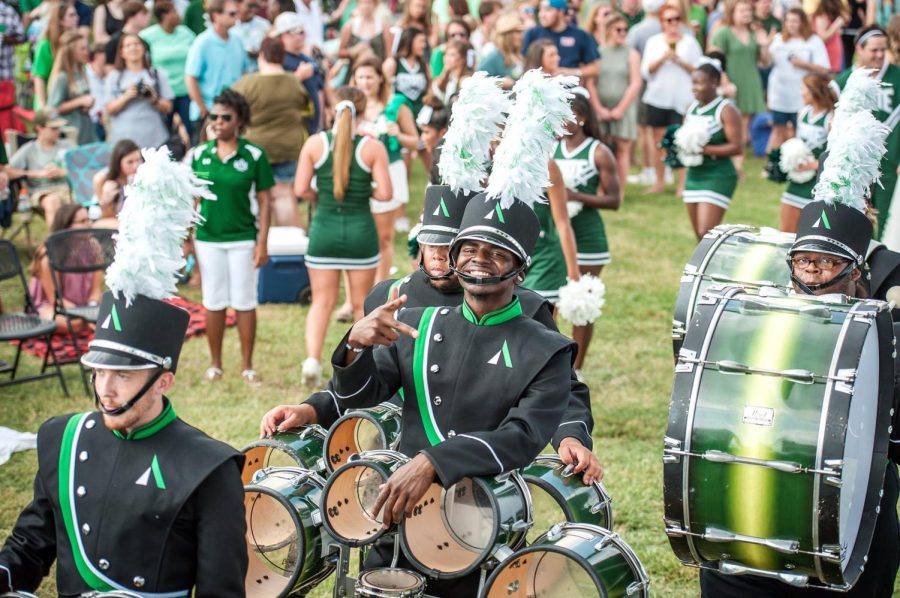 The DSU marching band performs for a crowd.

According to the dictionary, the definition of a sport is, “an athletic activity requiring skill or physical prowess and often of a competitive nature.” Band is full of different types of skill sets and physical activities while being competitive.
Marching Band
Marching band is full of physical activities. For example, band members must be in physical shape to be able to march in parades and carry their instruments for long periods of time.

Think of the percussionist and tuba players that have to carry their large instruments. A bass drum can weigh from anywhere from 15 to 40 pounds while a tuba usually weighs between 20 and 30 pounds. Carrying these instruments for a long period often leaves musicians fatigued.

Marching band consists of practice outside in the hot sun or the cold weather for hours on end. Halftime shows take many hours to practice, therefore there is a lot of physical activity.

There have been many instances where band members have passed out from dehydration because of the hours of practice that was required. During a practice at Charleston High School, a student passed out from playing and marching for 3 hours. She was taken to the emergency room, but was fine overall.

Marching band also involves cognitive skills. Imagine having to remember the keying of your instrument, the placement of your markers for your field show and having to memorize multiple pieces of music at a time. This could be a lot to handle at times!

Even though college bands do not partake in competitions, they do play against their rivals. For instance, when playing at a football game, bands tend to see which of the two could play the loudest or which band’s halftime show was better.
Concert Band
People underestimate the skills that band members must use during concerts. Some are under the impression that all their job consists of sitting and playing, which is simply not true.

Musicians must sit and stand a certain way while they are performing. For example, judges take off points during a competition if a musician is not standing or sitting still. It can be hard for a person who plays the flute to keep their arms outstretched for a long period of time, therefore their arms can begin to shake. Musicians can also shake from their nerves during a performance. Most concert competitions require the band members to sit still or have good posture and that could take some practice.

Just like marching season, concert season uses cognitive skills too. Most competitions use up to three or four songs in their performance. For people to memorize that many pieces of music, fingering of the keys, hits of the drum and lengths of breaths to hold is really mind-blowing.
But . . .
Malcolm Coker, a former Charleston High School football player, considers band a sport. He said, “When we were practicing, I saw the band running, exercising and playing their instruments. I don’t see how they played wind instruments and ran at the same time.” Coker also attended many marching band competitions and witnessed the amount of physical work band members put into the shows.

Others may not consider band a sport, but they do consider it entertainment. A member of the Delta State Univ. band, who asked to remain anonymous, has mixed feelings about the band being considered a sport.

She states, “Yes, we work our ass off just like the others but it’s a little different. I don’t 100% agree with that statement.”

She continues by saying, “I could argue high school marching band is a sport, but college not so much. College band is more for entertainment purposes because we don’t compete or anything like that. I would say band is more of a performance activity with sports like features.”

Band is for entertainment purposes, but it also takes a lot of practice to execute a halftime show.