“It makes sense to be afraid of poisonous insects or of hungry tigers, but what about fear when there’s no clear and obvious danger?” 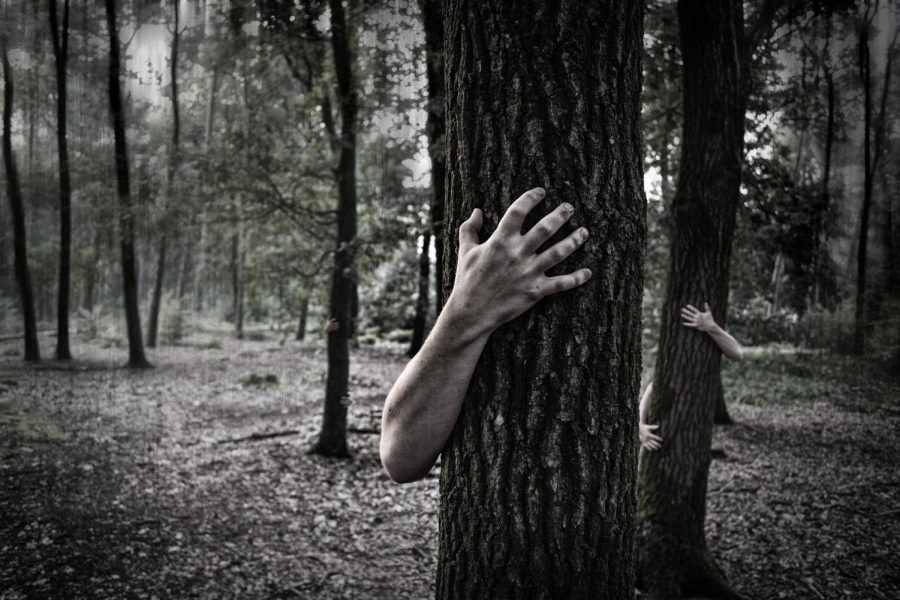 Things that are just not quite right tend to creep us out.

Why do we, as a species, go into panic mode when something isn’t quite right? Fear has been an essential part of survival for all of human history. We worry about predators, traps, and other threats for obvious reasons–We want to stay alive.

What about when that fear is a little more abstract?

It has to do with the fear of the unknown. This is where some of the more common “irrational” fears come into play–things like clowns and mascots scare us because we don’t know what is under the mask. There is not exactly a clear threat, but we feel that we can’t be sure of that.

According to Michael Stevens, “A mask hides the true emotions and intentions of the person underneath.”

Look at antique photos of Halloween costumes: People young and old don unusual, baggy clothing and objectively terrifying masks. Their intentions are hidden behind the dead eyes of a rubber or plaster mask: Do they mean us harm?
Takeover of the Unsettling
The search for unsettling media is not something that is new to more recent generations. Psychological horror stories and whispered campfire tales of things unknown have been commonplace for centuries.

The introduction of the internet into everyday life has definitely continued the tradition of terror into new formats and ideas, though.
Uncanny Valley
Dictionary.com defines the Uncanny Valley as “a psychological concept that describes…unease or revulsion…toward artificial representations of human beings, as robots or computer animations, that closely imitate many but not all the features and behaviors of actual human beings.”

Cut down to its simplest form, this means something falls into the Uncanny Valley when it looks just human enough to signal a mental alarm. It is the space between real and fake when it comes to looking like a person.

Androids and puppets are perfect examples of this concept. In 2016, Sophia the “human-like robot” debuted. Created by Hanson Robotics, she is a social machine that can hold conversations with talk show hosts and even has her own Twitter.

While she is a brilliant and masterful machine, there is one glaring thing that immediately bugs almost everyone–her face.

Sophia boasts a silicone face, complete with eyebrows and lipstick, stretched over machinery that acts like facial muscles. At best, it is distracting, and at worst, nightmare-inducing.

Animation has a tendency to lean towards the Uncanny Valley as well. Pixar’s short film Tin Toy from 1988 is commonly cited as straying into unsettling territory–by today’s standards, the 3D animation used for the short is rudimentary and crude, and the baby portrayed leaves the viewer uneasy and uncomfortable.
Analogue Horror
Analogue Horror Video is another new form and branched off from the Found Footage movie genre popularized in the late 1990s and early 2000s.

One Urban Dictionary entry describes Analogue Horror as “It is a subgenre of psychological horror in which the use of analog equipment/technology is very present. It is usually located on YouTube, and its time period is usually between 1960-1990…”

This genre tends to lean heavily into the style of an emergency broadcast, as seen in the YouTube horror series “The Mandela Catalogue.”

These videos, through the use of PSAs and safety alerts, document and describe a threat referred to as Alternates–beings who poorly imitate human appearance and voice in order to get close to and attack people.
Serve, Contain, Protect
SCP, which stands for “Serve, Contain, Protect”, has morphed into an entire community in itself, with over 6000 different SCP creatures and entities, all with their own descriptions and history.

In 2008, the description of a creature, called SCP 173 by its creator, was posted. It described a statue that stood still as long as you were actively looking at it–if you were to look away, however, it moves, and acts aggressively towards anyone in the room.

Since this first SCP entry was made, thousands of users over different online platforms have joined in, adding their own lore and entities to the world.

SCP 106 depicts a humanoid of an old man deep into the stages of rot. He is able to rot anything he touches–metal rusts, food spoils.
Why Do We Love Terror?
Unease and terror are emotions that, while acting as defenses against predators, are not exactly positive feelings. Why do we crave them?

It’s the thrill–not knowing, that feeling of vagueness, is a rush. The mind has never been fantastic at describing situations like this, where a flood of both positive and negative emotions are present.